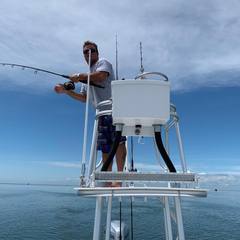 Captain, Brain King, grew up in Delaware on the eastern shore. He has been fishing since he was old enough to hold a rod. After graduating high school in 1991, Captain Brian, moved to the Florida Keys to work on a charter boat for the winter. In the Summer of ’92, he moved to Hatteras, North Carolina where he worked on a charter boat for three years. From there he went on to travel the world with some of the industries top captains and mates.

He traveled to Australia, New Zealand, Panama, Costa Rica, The Bahamas, Bermuda, Africa, Cape Verde, Venezuela, The Canary Islands, Mexico, Jamaica, and the Panama Canal as a fishing mate. He has also fished the British Virgin Islands, The U.S. Virgin Islands in Barbados and Puerto Rico, Turks and Caicos, Nova Scotia, and all of the East Coast including the Florida Keys and the Tortugas.

Captain Brian was then hired to build a 65′ Island boat works which he ran as captain for 12 years. He traveled to Bermuda and Mexico fishing several tournaments each year.

Captain Brian’s next adventure took him to Nags Head, North Carolina where he worked on a charter boat out of Pirates Cove. He worked there as a mate for two years, placing in three tournaments, and winning one with a purse of $244,000.00.

Captain Brian has professionally fished for the past 29 years and has been a successful licensed captain for over 20 years.

Reel-istic Fishing Charters and Captain Brian pride themselves on providing you with the best possible opportunity to catch fish as well as being a family friendly fishing charter. Captain Brian is a patient and respectful teacher and your safety will always come first. We promise you a memorable, exciting, once in a lifetime adventure.

The absolute best fishing and outdoor experience in the Outer Banks area.

"Great half day trip! Caught over 20 Spanish mackerel, a few false albacore, a moonfish and had a cobia that came off. We'll definitely use Brian again."  - Travis

"Had an awesome and successful day shark fishing, Brian was great! 100% would recommend."  - Tommy

"Great trip out today with Brian. Would recommend to anyone visiting OBX!!"   - Peyton